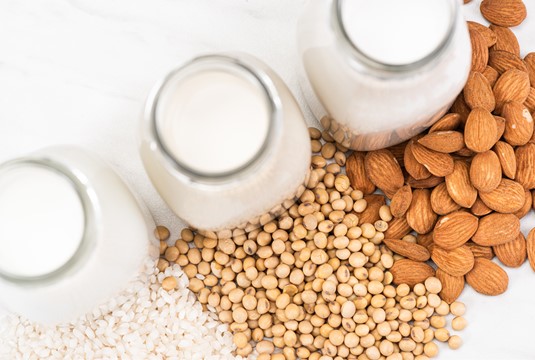 Plant-based milk continues to soar in popularity year after year. According to Mintel, a record one in three Brits now drink plant-based milk, to which the Vegan Society has forecasted the market to be at $705.3 million by 2025.

Long gone are the days of making your way to the back of the grocery store to find the hidden section of a deserted aisle if you were lactose intolerant or vegan. Nowadays, you can find several if not an overflowing number of milk alternatives with their own dedicated refrigerated area.

The rise in popularity stemmed from clean eating that began trending a few years ago, but how much do you really know about your plant-based milk? Read on to learn more about milk alternatives and the most popular choices today.

How sustainable are plant-based milks?

Non-dairy milk is better for the environment based on lower carbon emissions and less land and water required for production.  However, you may not know that with the increasing demands and mass production, anything can cause adverse effects to the environment.

Did you know that it takes 4.5 liters of water to grow a single almond?! Almond milk requires more water to make than both oat and soy milk together (however, it remains less than cow's dairy). With coconut milk, you need to understand where the coconuts are being sourced – always look for Fairtrade certification.

Are milk alternatives safe for kids?

Several countries recommend that children under the age of two receive whole milk to ensure they are receiving sufficient nutrients during this crucial stage of development. The traditional choice of dairy milk offers a well-balanced source of nutrients, including vitamin D and calcium, which are also key for a child's growth and development. Adults can also benefit from cow's milk, as it's a great source of calcium as bone density decreases with age.

In terms of protein, only soy milk can compare, with 3.4g of protein per 100ml, as cow's milk contains 3.5g per 100ml. All other milk alternatives like almond, oat, coconut, and rice milk have considerably less protein. For children over the age of two, this is then based on the child's (or parent's) individual tastes and dietary needs.

It seems like you can turn anything into milk these days – for this blog, we look at six popular milk alternatives so you can gain a better understanding of their characteristics and what tips you should keep in mind when choosing one.

The earliest mention of almond milk was in a Baghdadi cookbook from 1226. Probably one of the most popular plant milks, almond milk is rich in vitamin E and is enjoyed for its nutty taste and lower number of calories than the dairy option.

Often used for cooking, like oatmeal or smoothies, the non-dairy milk has many blends to choose from, whether it's flavored or unsweetened. However, it is worth noting that almond milk has less than 1g of protein and fiber per serving, so you may want to top off your cooking with chopped nuts or nut butter for the extra protein kick.

Oat milk is probably the trendiest of plant milks, thanks to market leader, Oatly, who has won the hearts of many with their barista edition. The awarded vegan milk guarantees the perfect frothy, creamy foam to complement any hot beverage (can you tell we're fans?!)

Made simply from soaking oats in water, its fiber content makes it more filling than other plant-based milk; however, its protein content is low and often has to be fortified with calcium, vitamin A, D, and riboflavin.

The downside? Oat milk typically has added oils, thickeners, and gums. The oats themselves make it a more carb and calorie-dense choice, with each serving adding up to 100 calories or more. 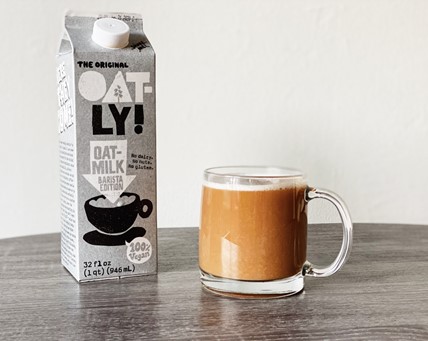 Arguably the first-ever milk substitute, soy milk has been made in China since the 14th century during the process of tofu-making. Soy milk is praised for its protein, fiber, and antioxidants, plus its low levels of saturated fats and for being cholesterol-free. However, it can hold a high number of calories if sweetened and is a common allergen for both adults and children.

Soy milk has a mild and creamy flavor, which of course varies by brand, but generally, the milk alternative is great for cooking. While it is delicious in coffee and tea, it is known to curdle due to the acidity level differences between the two liquid substances.

Another nut-based milk substitute, cashew milk, is made the same way as almond milk (soaked and blended in water and strained) with similar nutritional value. The main difference comes down to the flavor, and cashew milk has a richer, creamier taste that is particularly tasty in coffee, matcha, and tea.

Cashew milk is often packaged with added vitamin D and calcium and lacks protein and fiber.

Not to be confused with the tinned coconut milk traditionally used for baking or making curries, the carton coconut milk is watered down quite a bit more, making it lower in fat and less intensely flavored. This is used more for putting into hot beverages, cereal, or drinking plain.

Coconut milk has close to zero protein and has the highest fat content of all other milk substitutes, which is important to be aware of as it is saturated fat. Just one cup can have up to 4g of saturated fat, which is approximately 20% of your daily value.

Rice milk is made from blending rice with water. As its natural flavor is very mild, you'll find that most rice milk has a lot of additives – one being refined sugars. The milk alternative is the least likely to cause any allergies, so this tends to be the milk of choice for those avoiding dairy, nuts, seeds, or legumes. With little to no nutritional value, it is recommended not to rely solely on rice milk and ensure you consume your daily nutrients from other sources.

Alternative milk may not have as much nutritional content as traditional cow's milk, however, the general fat content is lower for those that wish to control this in their diet.

It is worth noting the importance of reading product labels correctly, though. Look out for added sugars that laden a lot more calories – this may have been the main reason for ditching the dairy in the first place!

We mentioned that almond milk is made with nuts and water, but the actual almond content is minuscule a lot of the time. There is a lot of water, oils, sugar, and gums added, so just check the ingredients.

In general, look out for as few ingredients as possible in all of your milk substitutes, though you may ideally want the fortification of other nutrients such as calcium and vitamin D.

If you have any allergies, health, or dietary restrictions, we suggest you speak with your GP or a registered dietitian for professional health advice.